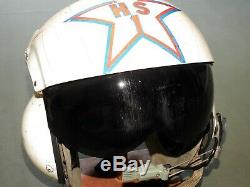 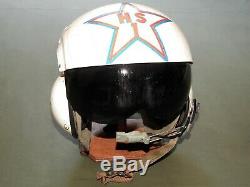 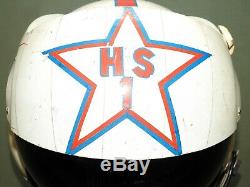 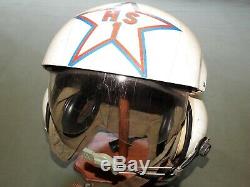 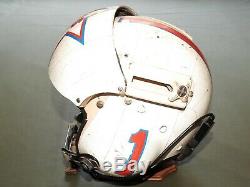 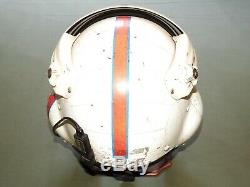 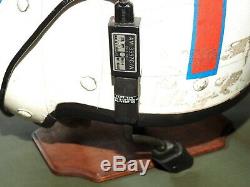 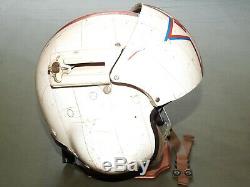 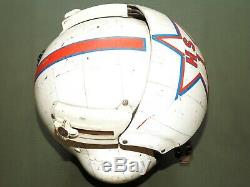 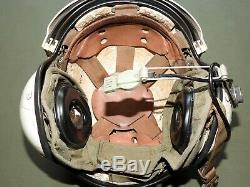 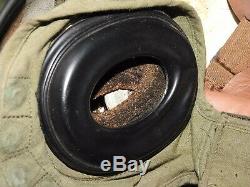 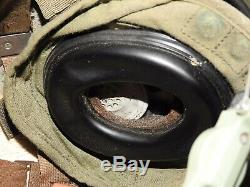 From 1951 to 1997, US Navy Helicopter Anti-Submarine Squadron One (HS-1) was the fleet replacement squadron, conducting training for pilots and aircrews, and providing updated combat search and rescue techniques. In the early 1980s, HS-1 flew the SH-3 Sea King on training exercises out of NAS Jacksonville in Florida. Navy helicopter pilots of that era wore the classic Gentex SPH-3C flight helmet, often embellished with reflective tape designs in their unit's colors. This Vintage US Navy HS-1 HELICOPTER PILOT GENTEX SPH-3C "RAMS HORN" FLIGHT HELMET is in good condition, with the tinted and clear visors remaining very difficult to manipulate with the pull down knobs, and really only able to be moved by hand, some vertical scratching to the middle tinted visor, some light vertical scratching to the middle clear visor, a small chip in the top left corner of the visor housing, some scattered scratching around the exterior, some brownish soling around the inside, some ongoing deterioration to the foam padding of the interior ear cups, missing the upper screw from the front left visor housing, missing the nomenclature tag from the lower reverse, and with some overall age wear evident (ALL pictured).

This item is in the category "Collectibles\Militaria\Vietnam (1961-75)\Original Period Items\Hats & Helmets". The seller is "abramsantiques" and is located in Claremont, California. This item can be shipped worldwide.