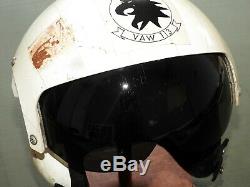 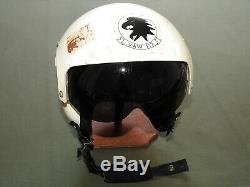 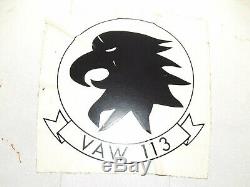 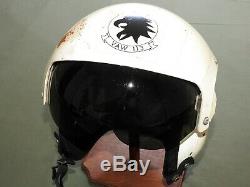 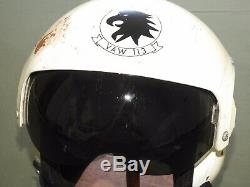 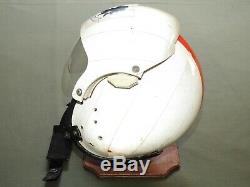 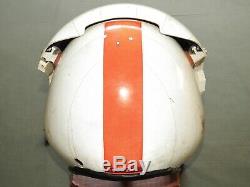 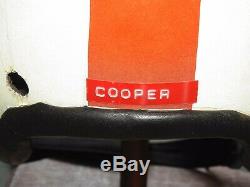 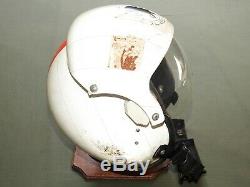 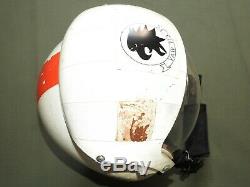 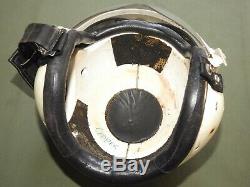 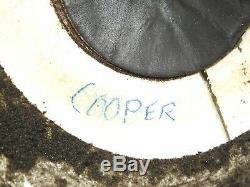 Lieutenant Michael Cooper joined the US Navy in 1965, graduated from Vanderbilt University with degrees in Computer Science and Engineering in 1973, thereby earning his commission, and soon graduated from flight school at Pensacola, Florida. He was carried qualified in August 1974.

He flew the E-2 Hawkeye as part of Carrier Airborne Early Warning Squadron 113 (VAW-113); the "Black Eagles" played a vital role in Operation Frequent Wind, the evacuation of American diplomats and their dependents from the Saigon Embassy in April 1975. Cooper performed over 100 carrier landings in the Hawkeye on the USS Enterprise by October 1978, and went on to become an instructor at Pensacola Naval Flight Training School in the 1980s.

This Vintage US Navy E-2 HAWKEYE PILOT NAMED ID'D VAW-113 BADGED HGU-52/P FLIGHT HELMET is in very good condition, missing the oxygen mask mounts, missing the boom mic, missing the commo wiring, missing the ear cups and ear phones, missing the black velcro distress light attachment square from the lower right visor housing, missing the upper and lower interior crown pads, and with some scattered edge "bubbling" to the squadron decal at front, some scattered nicking to the reflective stripe running vertically down the middle back crown, some dark soiling at the right ear, and with some scattered age wear evident (ALL pictured). Otherwise, the helmet is in fine shape, with no other damage to the tough fiberglass construction. Most interestingly, it bears the classic "VAW 113" Black Eagles squadron decal affixed to the middle visor housing, carries a striking white reflective tape pattern around the exterior, with a bright reddish orange stripe running vertically down the middle back crown, and is adorned with the original "COOPER" red plastic name tag neatly affixed at the lower back.