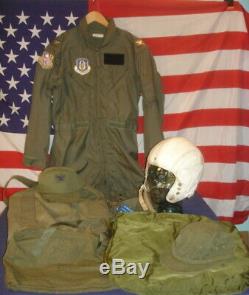 1950'S COLD WEATHER UTILITY CAP. THE FOLLOWING IS FROM THE SMITHSONIAN NATIONAL AIR AND SPACE MUSEUM. Foil: 27 Panel: 2 Column: 2 Line: 13. Has always had a love of flying, and of the United States.

In January 1951 he entered the United States Air Force, leaving the farm he grew up on in rural Massachusetts. He has often said that what got him through his training to be an officer and pilot was a determination that nothing was going to keep him from flying. After a few years on active duty, he served honorably as a Reservist through the Bay of Pigs crisis, the Cuban Missile Crisis, Vietnam, and through the bulk of the Cold War, attaining the rank of Colonel and status of Command Pilot. Myska flew a wide variety of aircraft - the T-6, B-25 (training), C-46, C-54, C-l 19, C124, and he finished his flying career in the C-130.

Myska retired from the Pentagon in 1982, where he served, among other positions, as Chief, Operation, Plans and Readiness Division, Office of Chief, Air Force Reserve, HQ USAF. Among his many decorations are the Legion of Merit and the Meritorious Service Medal with One Oak Leaf Cluster. Myska was also involved with flying outside of the Air Force. For several years he worked with the David Clark Company in Worcester, Massachusetts. During his time there, he worked on both the X-15 flight suit and the Project Mercury flight suit.

During this time he got to know Scott Crossfield, of X-15 fame. He also held a commercial pilot's license for a number of years.

The seller is "mudsill-captain" and is located in Sunbury, Ohio. This item can be shipped worldwide.