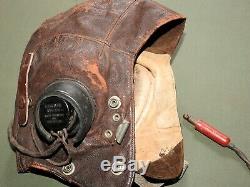 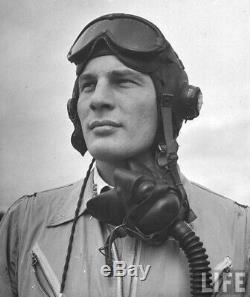 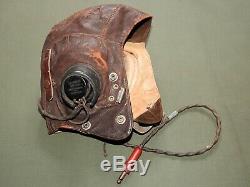 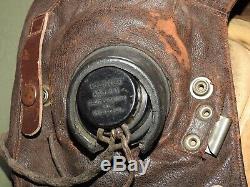 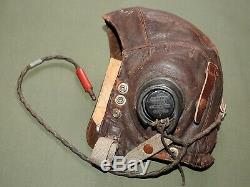 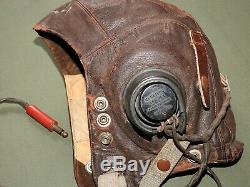 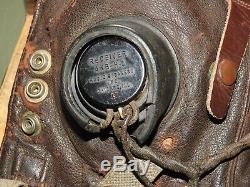 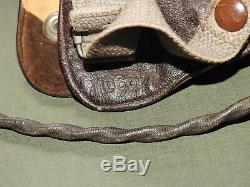 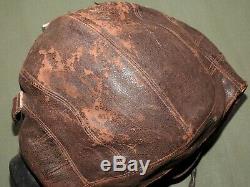 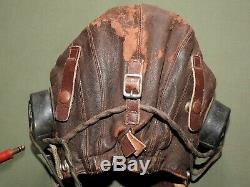 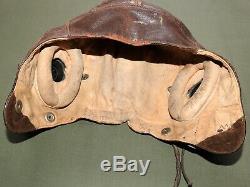 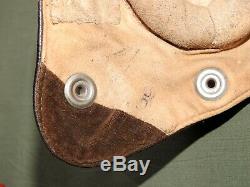 The 8th Air Force was the most potent arm of American air power during WW2, tasked with the strategic bombing campaign against Germany. Flying B-17 and B-24 heavy bombers with P-51 Mustang fighter escorts, the "Mighty Eighth" swept the vaunted Luftwaffe from the skies in epic air battles over Occupied Europe.

Many P-51 fighter pilots chose to wear the classic British RAF Type C leather flight helmet, fitted with the US HS-38 headset, consisting of ANB-H-1 ear phones, "Y" loom wiring, and a PL-354 red plastic end plug. This US Army AAF WW2 8TH AIR FORCE FIGHTER PILOT BRITISH WIRED TYPE C FLIGHT HELMET is in fair condition, with heavy ongoing flaking to the upper right front and lower left back crowns, some flaking at the upper right ear, a small partial edge crack in the front right ear cup, a noticeable partial edge crack in the back left ear cup, some scattered outdenting from the interior ear pads, some scattered drying around the exterior, some scattered darkening around the inside, and with moderate overall age wear evident (ALL pictured). Otherwise, the helmet is in fair shape, with no other damage to the tough brown leather construction.